This is a short film that was directed by the French animation collective H5, François Alaux, Hervé de Crécy + Ludovic Houplain. It was presented at the Cannes Film Festival 2009. It opened the 2010 Sundance Film Festival and won a 2010 academy award under the category of animated short. 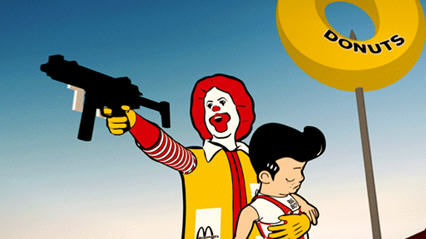 In this film there are two pieces of licensed music, in the beginning and in the end. All the other music and sound design are original. The opening track (Dean Martin “Good Morning Life”) and closing track (The Ink Spots “I don’t want to send the world on fire”) songs are licensed pre-existing tracks. All original music and sound design is by, human (www.humanworldwide.com)

Interests: I have a passion for learning, travel, surfing (on waves; ), writing (on my book), dance, nightclubs and night life, Hanging out View all posts by Antonio Acevedo Garrido